I do like a bit of woodwork. And what is a jaegerstock if not a very long stick with some pointy bits attached?

This instalment takes place entirely in my workshop, as I’m fitting the heads to the shaft.

This is part two of the Jaegerstock series. You can find part one here:

And all jaegerstock posts here: 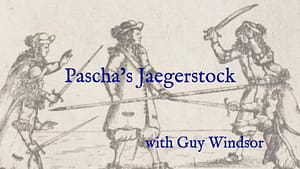 I recently interviewed Reinier van Noort for my podcast, and while we were talking he mentioned a documented set of solo forms for the Jaegerstock, a nine-foot long spear with a point at both ends. The source is Johann Georg Pascha’s book Kurtze ANLEIDUNG Wie der BASTON A DEUX BOUS, Das ist JAEGERSTOCK/ Halbe Pique oder Springe-stock Eigentlich zu gebrauchen und was vor Lectiones darauff seyn. This was originally printed in 1669, and is a translation of a French work. Reinier has published his translation (along with many more of Pascha’s works) in his book The Martial Arts of Johann Georg Pasha. I love solo training, and so promised in the show to figure out those solo forms and video them.

This turned into something of a project, including doing the research, making the weapon, figuring out the forms themselves, and so on. It struck me when I was starting out that it has been a long time since I approached a new source from scratch, and that it may be helpful to other scholars of historical martial arts to see how I get from the page to the physical action. It’s never just a question of read the whole book and then do all the actions- I always start with a small chunk of text and try it out. The process is iterative and cumulative, not linear.

I don’t intend to write this up in a formal way, but instead create a video log of the process, which will include asides, digressions, mistakes, ruminations, plenty of expletives, and eventually lead us to a working interpretation.

One note before we begin- there are several existing interpretations already out there, including Reinier’s own. In the normal run of things, if I was just trying to come up a working interpretation I would study those at the same time as creating my own- there is no sense in re-inventing the wheel. But because I want to illuminate my process of ab initio interpretation, I’m wilfully ignoring the existing ones. This is not best practice if other interpretations exist, but I’m doing it here to simulate the situation of being the first or only person working on a given text.

I’ve got half a dozen videos shot and edited already, so am planning to release them here on a weekly schedule. This gives you a chance to train along in real time, if you’d like to.

So, without further ado, here’s the first video:

This is part one of the Jaegerstock series. You can find the rest here as they are produced: